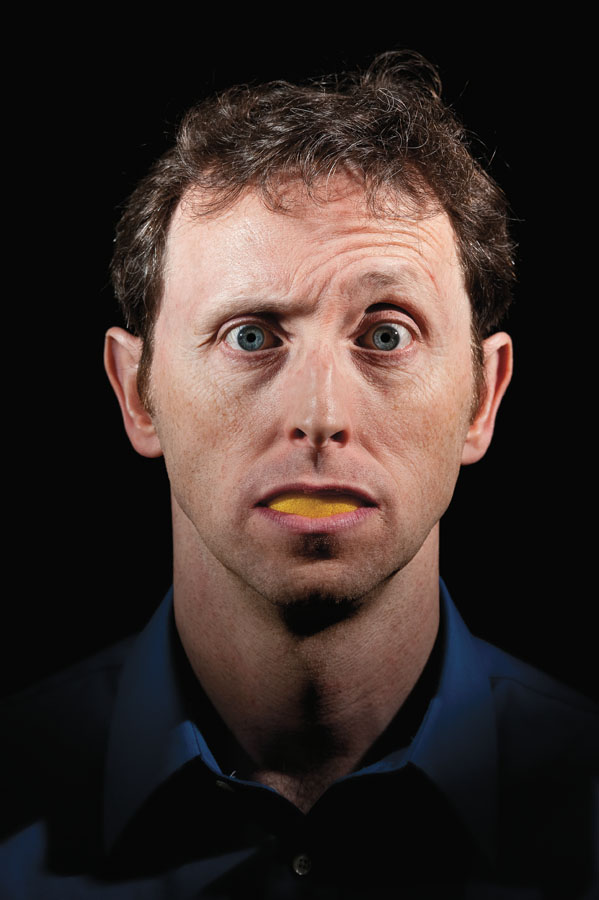 MPH: One of the things I loved about writing Lemonade Mouth Puckers Up was that I was able to dig even deeper into the individual lives of each of the five main characters. Olivia’s estranged mother reappears in her life and sets off a firestorm of emotion for Olivia, Mohini has to deal with her parents (who are immigrants from India) and their ideas about arranged marriages, Stella falls in love, Charlie finds himself in the middle of an existential crisis and needs a way out, and Wen’s family life is thrown for a loop when his dad suddenly quits his stable job to start a new, dubious business selling hot-dogs from a van. As a musician and former high school screw-up myself, I feel a connection with each of these kids. I had a lot of fun with this one.

MPH: Like these five characters (especially Stella), I’ve always carried a secret goal to make the world better in some grand idealistic way, only I never had any idea where to start, so Lemonade Mouth and Lemonade Mouth Puckers Up became my way of imagining how a group of people (kids, in this case) might really be able to work together to incite a revolution for positive changes in the world, changes that start off small and get bigger and bigger. Kindness, fairness, respect, family, community, gratitude, and speaking out when injustice is done, especially when speaking out doesn’t feel easy to do. For me these aren’t platitudes, they’re real. We can spend our lives collecting stuff and thinking only about ourselves but really what’s important is what each of us leaves behind in the world. I created these characters but on some level I feel like they almost act independently from me and they’re out there changing the world for the better. I love that.

Q: Both Lemonade Mouth books are written from the five different perspectives of the band members. Why did you decide to use the different points of view?

MPH: There’s a book called the Beatles Anthology, where somebody took separate interviews of each of the Beatles and pieced them together to make one continuous story told by four different voices. I wanted to write in that style, more or less. I added my own flavor to it, but from the first moment I  thought (and still think) that it’s a great way to get a feel for each of the people, their individual stories and motivations and feelings, while also following the story they all share—the band’s wild, creative, world-changing ride.

Q: Will there be a third Lemonade Mouth book?

MPH: I don’t know.  I will admit that I do know in my mind what happens next to them and to the revolution. I knew from the beginning exactly where I wanted it all to go. LM book 3 would be the last one, if it comes at all. But right now I’m working on something new — a novel about demons — and after that’s out, we’ll see.

Q: Where did the idea for the futuristic world of A Crack In The Sky (The Greenhouse Chronicles) come from?

MPH: Whenever I write a new story I always start the same way: with the characters. The plot and the rest of it come later. In this case, my characters just started off living in a domed city that protects them from a desert wasteland in the future.  I had an idea for a story about the end of the world as we know it and the one boy who might be able to make things right, and I went from there.

Q: The book is a real page turner but it still makes you think hard about issues like climate change. Was that your goal? How much of the climate change aspect of A Crack In The Sky is based on science and how much of it is made up?

MPH: Again, my goal was to tell as good a story as I was able and to fill it with rich characters that interested me. That said, the world of the story did come, in part, from climate change issues, so if the book leaves people thinking about those things then I’m happy about that. As far as how much of the story comes from science verses imagination, I have an “Author’s Note” at the end of the book that details a lot of this, but in a nutshell, I started off by doing some research about global climate change so I would have at least some basis in fact, and from there I often took things to an unlikely extreme. For example, here in the real world global sea levels truly are rising, but nowhere near as much or as quickly as in the world of my story.

Q: Tell me about Floey Packer (I Am the Wallpaper)’s writing. Why haikus?

MPH: Haikus are great because they can squeeze so much into so little. They’re tiny nuggets that can express deep thoughts or giant emotions. With only seventeen syllables, the writer has to make every word count. I guess that’s why I felt like Floey, who feels like the wallpaper in comparison to other people in her life, would naturally gravitate to haikus as a way of documenting the various steps in her personal journey as she tries to reach for something higher. Plus, they’re a lot of fun to write.

Q: And the idea of a private diary made public over the Internet?

MPH: That came from thinking about how we all value our privacy even though we live in a brave, new world where it can be so very easy (too easy!) to share information with a lot of strangers through the Internet. I think a lot of people are only just now realizing some of the implications–how powerful an effect this new technology can have on our lives, both good and bad.

Q: Did you ever keep a diary?

MPH: Yes, but only in intermittent periods throughout my childhood. The problem was that I worried that one of my sisters might discover it and read whatever I’d written. In fact, this scenario never actually happened, although my sister Carolyn once burst into the bathroom, threw back the shower curtain and, cackling hysterically, snapped a picture of me in all my nine-year-old nakedness–a traumatic event that took me ages to get over!

Q: Who were some of your favorite authors as a child? As a teenager?

MPH: As a child: The Lorax by Dr. Seuss, Kidnapped by Robert Louis Stevenson and The Great Brain series by John D. Fitzgerald. As a teenager: The Outsiders by S.E. Hinton, East of Eden by John Steinbeck, The World According to Garp by John Irving, From the Mixed-Up Files of Mrs. Basil E. Frankweiler by E. L. Konigsburg, A Wizard of Earthsea by Ursula K. Leguin.

Q. What is the best thing about being an author?

Mark was born in Liverpool, England in the Oxford Street Maternity Hospital, the same hospital as John Lennon. His family moved to the U.S.A. when he was one and most of his childhood was spent in Barrington, Rhode Island. Below is a picture of him when he was a teenager.

Growing up Mark worked in many different jobs including gas station attendant, fast food zombie, beach sticker enforcer, dishwasher (he was fired after only two days), clam factory worker (this was the smelliest of jobs–his sisters avoided him all summer), and movie theater usher, among others. After college he played guitar and sang for an off-kilter rock band called Exhibit A in the Boston area. About becoming a writer he says, “I’ve been making up stories for about as long as I could hold a pencil. Even before then I loved to tell them. Today I spend hours every day sipping coffee and typing into a keyboard.“

Mark Peter Hughes’s first novel, I Am the Wallpaper, is a story about a girl who feels unnoticed and ends up being an unwitting online sensation. Soon after its publication he began work on Lemonade Mouth, a story that taps into his experiences playing in oddball rock bands and trying to change the world. In a style loosely based on the interviews of the fab four in The Beatles Anthology, the five oddball members of the band called “Lemonade Mouth” tell the band’s chaotic story and their own individual stories in their own voices. The Disney Channel adapted Lemonade Mouth  into the #1 cable movie of 2011.

Mark’s third novel, A Crack In The Sky, is a futuristic adventure of a boy and a mongoose on an overheated Earth at the end of the world. His fourth novel,  Lemonade Mouth Puckers Up, is a stand-alone sequel that continues the story of the growing revolution and family drama that began in Lemonade Mouth. He is working on the follow-up to A Crack In The Sky, which will be called The Keepers of Tomorrow.

Mark lives in Massachusetts with his wife, three kids, and a dog named Wendel.

… Mark was once kicked out of eighth grade music class for throwing a spitball.

… He plays trumpet and guitar with his band, The Church Ladies.

…He did a commentary about the writing life for National Public Radio. You can listen to it here.